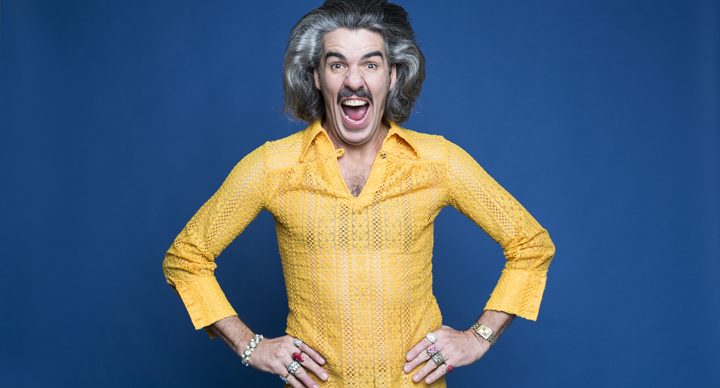 Doors: Doors open at 7pm for a 7:30pm show. Seating will be cabaret tables and guests are invited to bring their own food to enjoy before the show. The bar will be open from 7pm but will close while the performance is in progress.

He puts the Boss in Bossa Nova, the Yes in Polyester, he’s the patron saint of the safari suit: he’s Barry Morgan, and is the celebrity organ salesman who is wooing audiences with the golden syrup sounds of his vintage 1980s, Hammond Aurora Classic.

Barry Morgan is packing up his Toyota Crown, strapping the Hammond Organ to the roof and hitting the road to fulfil his personal mission to not only share the ‘Joy Of The Organ’ but to educate.

Barry will entertain, amaze and thrill audiences as he demonstrates all there is to know about hosting your very own organ party – in the privacy and comfort of your lounge room!  Barry will teach the 5 organ party essentials: home care and maintenance, how to throw together that killer outfit, personal fitness and hygiene, creating the perfect catering pack and of course how to play the organ.

Barry Morgan was plucked from obscurity to perform on ABC’s Spicks and Specks where he became an instant audience favourite. He was voted the third best Spicks and Specks moment in 2011 and trended #2 on Twitter after his Spicks and Specks Finale appearance. Barry has also graced our screens on Gordon Street Tonight, The Marngrook Footy Show and on ABC’s New Years Eve Pub Quiz.

A career highlight to date was touring with international superstar Gotye, and Barry also showed through the release of his own album “The Touch of You” (2012) that he is not just one of Australia’s most entertaining performers, but one of its most accomplished musicians.

Barry will be demonstrating his famous One Finger Method where you can experience the safest way to get the most out of an organ with just one finger!

Barry always likes to dress to impress so come along music lovers, don your best safari suit or evening gown, bring your friends and get down with Barry Morgan and his ultimate Home Organ Party Experience!

Don’t miss out on tickets to the Barry Morgan’s World of Organ’s Home Organ Party Experience – get in quick or miss out.

“The One Finger Method really works”

“Whatever the reason, DO NOT MISS THIS SHOW!!” ***** Johnathon Graham, FunnyTonne

‘The stuff cult figures are made of. Allow him to make your festival.’ ****

“The show is a triumph of character comedy with a broad appeal. See it. Enjoy It. Buy an organ.” **** Scotsgay, Edinburgh

“YOU’D have to have a heart of stone not to love a well-coiffed, safari-suited organist extraordinaire” ****

“With one hand on his organ and another on the pulse of his audience, cult hit Barry Morgan unleashed his 1981 Hammond Aurora Classic on an enthusiastic crowd.” ****  The Advertiser, Adelaide Feb 17, 2011

“This is entertainment with a capital E. Who knows, Adelaide’s own Barry Morgan may yet become this city’s greatest icon. Bigger than Don Dunstan, bigger than Bung Fritz!” Indaily’sBlog – Fringe Reviews music, Peter C Pugsley