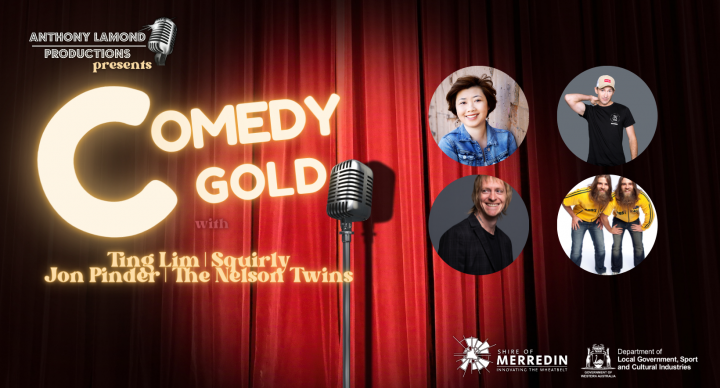 Comedy Gold is back in the Wild West for another year with yet another diverse and hilarious line up. Celebrating it’s 10 year anniversary the show will include five comedians and four acts: Jon Pinder, Ting Lim, Squirly and the Nelson Twins are on the bill for this year.

Get to know the comedians….

Ting Lim Singaporean-born Ting Lim is a beloved favourite on the Brisbane comedy scene. Her dark wit, cutting humour and distinctive style have made her a rising star in Australian Comedy Circuit.

Career Fisherman turned funnyman, Squirly is a working class comedian who spins hilarious yarns that have made him one of the most popular comedians currently performing around W.A. Funny, naughty and sometimes a little bit dangerous makes Squirly one act you certainly cant miss

British-born but proudly Perth honed, no audience forgets a Pinder gig. Combining acute observations, incredible impressions and razor-sharp audience banter ensures he destroys wherever he goes, there is no doubt why Jon Pinder’s star is on a meteoric rise.

The Nelson Twins’ are a iconic act and the only identical twins doing Stand Up Comedy, the material is hilarious and their crowd work is always exciting.

– Britain’s Got Talent The Champions
– Australia’s Got Talent
– The Footy Show
– Australian IQ Test, Insight
– Before the Game
– The Project
– National Geographic’s How To Win At Everything