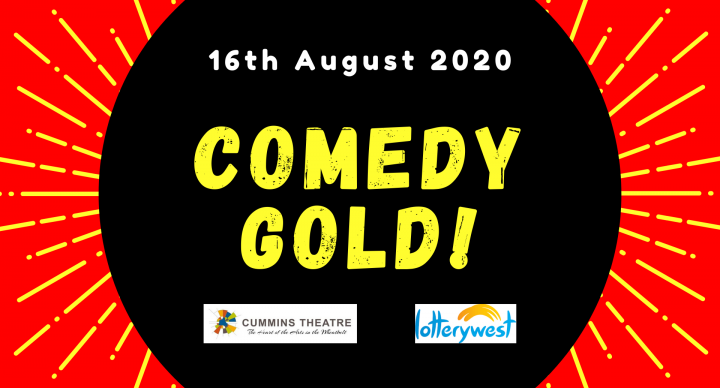 One of the funniest touring Comedy Shows going around Australia “Comedy Gold” is back and this year  the line up is filled with Western Australia’s most diverse, funniest, newest and most recognizable Stand Up Comedians.

Your Feature act is none other than Peter Rowsthorn who is a  Comedy Icon and Veteran of more the 30 years on Australia’s Stages and  T.V’s. One of the most recognizable and much loved comedians Rowsthorn is a high energy, fast paced stand up comedian one minute and a measured character actor the next.

Most recently, Peter has appeared regularly on “Thank God You’re Here” series 1, 2, 3 and 4, popped up on “Talkin’ ‘Bout Your Generation” and can currently be seen hosting the delightful “Can We Help” on the ABC on Friday nights. But Peter is probably still best known as long-suffering husband and pants-man Brett Craig on “Kath & Kim”.

Your M.C Cameron McLaren is a giant of the perth comedy scene and was awarded “Best Comedy at the WA Fringeworld .  Cameron has sold out Fringe shows across the country and was handpicked by the producer of Channel 7 to be the audience MC of Telethon. The West Australian described him in this role as “There is a genuine sense of fun in his delivery…this proves infectious.”  Cameron is fun and loveable but can flirt with the line if the occasion requires. The audience are instantly put at ease with his silliness and you can tell he truly loves what he does.”

First up is new kid on the block Frankie who is on her first comedy tour. A newbie to Stand Up Comedy she is on work experience for this tour but don’t be fooled she has a bright future ahead of her. Frankie has great stage presence and a warm charm about her.

Next up is one of the fastest rising comedians on the Australian Circuit Emma Kause and the interesting thing she only started comedy at the ago of 40. Yes that’s right at at 40 shed said it was time to let go of the idea of what anyone thought of her and live out one of her desires to do comedy, so she adopted a ‘Just Do It’ attitude and has since smashed into the comedy scene!

Most recently, she auditioned for Australia’s Got Talent and she was encouraged by the judges response.

“Emma… you need to keep doing this, because you do it very very very well…. I’d watch you gig anywhere… that was fantastic!”  – Shane Jacobson.

“I’m so glad you’re doing this, because I’m a Mum myself and if you don’t laugh, you’re gonna cry.”  – Lucy Durak.

Her comedy routine was chosen to be one of 30 acts that remained in the Australia’s Got Talent 2019 series as she progressed through to the Semi Finals.

W.A this is a great opportunity to reward yourself, get together with family and friends and  come out and have a great belly laugh whilst supporting local comedians and venues.