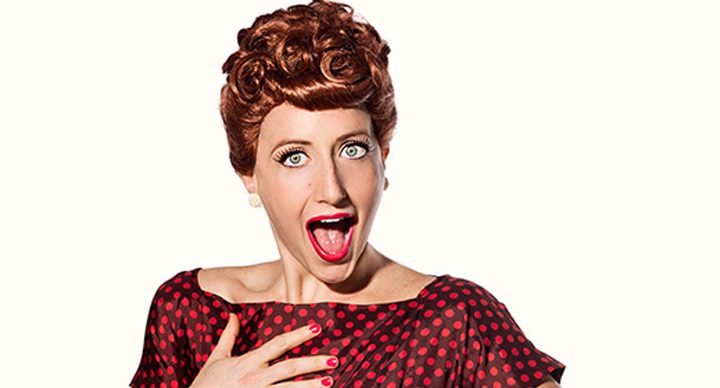 Doors: Doors open at 6:00pm for a 7:30pm show. Dinner will be served from 6:15pm. The bar will be open from 6:00pm but will close while the performance is in progress. Show runs for approximately 60mins with no interval.

The show that knows we all love Lucy!

Lucille Ball was the Queen of American comedy for decades. After years paying her dues in B-movies, she won the public’s hearts and reigned supreme as television’s biggest star in I Love Lucy – the most popular sitcom in American history. Wacky, fearless, and totally endearing, Lucy broke the mould for the way women were allowed to behave on TV.

As she conquered the entertainment industry, Lucy was joined every step of the way by her real-life and on-screen husband Desi Arnaz. Together they defied conventions and expectations, and ensured total control by creating their own studio. As the first couple of television comedy, Lucy and Desi held up a fun-house mirror to every marriage in America exaggerating and making amusing every idiosyncrasy of married life. But as Lucy’s popularity and relationship with the public thrived, her relationship with Desi suffered both professionally and privately.

Generations of fans know and love Lucy Ricardo for being impulsive, foolhardy and child-like – but the producer of I Love Lucy once said “Lucille Ball is about as different from Lucy Ricardo as anyone could possibly be.” She was a dedicated professional whose seemingly effortless comedy was a result of rigorous attention to detail and fanatical rehearsing.

Her own marriage may have fallen by the wayside, but in doing so, she was credited with saving the marriages of millions of Americans.