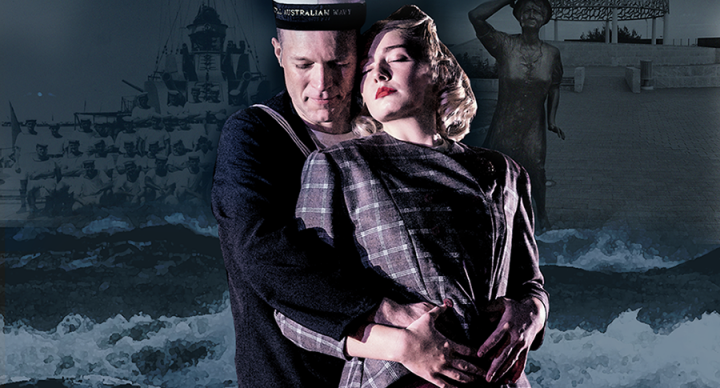 The Cummins Theatre is thrilled to  bring the story of Australia’s greatest naval disaster – the sinking of HMAS Sydney II – to Merredin this March, with Theatre 180’s production of Sydney II: Lost and Found.

A true story of romance, danger, courage and fateful decisions, from the dark days of WWII and a race against time over sixty years later, comes this epic true story of love, loss, hope, fear and courage – and the resolution of a mystery for those who never gave up.

When HMAS Sydney II was sunk by the disguised German Raider HSK Kormoran in November 1941, it took with it, along with her entire crew of 645 men, the hopes and dreams of a nation as the war arrived on our doorstep. Among the Sydney’s crew was a young Western Australian Able Seaman, Allan Rowe. Recently wed, Allan had only just learned that he was to be a father. For 66 years Allan’s wife, Jessie, and their daughter, Ellen, hoped that one day the wreck of The Sydney would be located.

In 2008, due to the persistence of the volunteer Directors of the Finding Sydney Foundation, that dream became true.

Acclaimed actors Tom O’Sullivan (Home and Away, Underbelly, Packed to the Rafters) and Stuart Halusz, and stage newcomer Morgan Dukes, form the dynamic cast who lead the story across oceans and eras as we chart the loss and discovery of Australia’s famous warship and her valiant crew, and the dedication of the Finding Sydney Foundation team who discovered the wrecks.

This landmark production brings together the immediacy of theatre with the visual impact of cinema, to commemorate the 80th Anniversary of that devastating sea battle and ensure the legacy of those who died in service of their country will never be forgotten.

A story for all Australians, this depiction of love, courage and determination is not to be missed.

There will be a Q&A session following the performance, hosted by Director Stuart Halusz.

PROOF OF COVID-19 VACCINATION AND MASKS ARE REQUIRED TO ATTEND THIS PERFORMANCE.