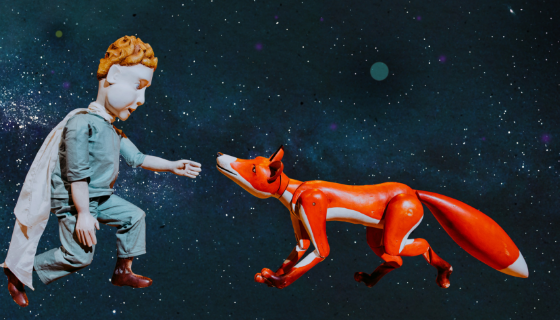 Cummins Theatre is proud to present The Little Prince

Take flight with your imagination with Spare Parts Puppet Theatre’s acclaimed production of The Little Prince adapted by Simon Clarke from the book by Antoine de Saint-Exupéry. With its timeless message about the importance of friendship, The Little Prince is an adventure story that celebrates the richness of human feeling and imagination. One of the most widely read books in history – 140 million copies sold worldwide and printed in more than 250 languages and dialects including braille – Saint-Exupéry’s exquisite tale tells the story of a curious prince who leaves his tiny home planet and journeys across the universe, discovering that adults have very strange ideas about the things that really matter

“The work speaks strongly about what really matters in life. It isn’t expensive or flashy things that have the greatest value, it’s the people we form relationships with,” he said.

Jiri Zmitko’s design cleverly reveals the tiny world of the Prince, the Sahara desert and the stars of the night sky. His hand carved puppets of the Fox, the Snake, the Little Prince and the Rose, are characters sure to live on in the audience’s imagination.”

Lee Buddle’s music creates a mood of mystery – and is so beautifully performed by world-renowned pianist Ross Bolleter – Karen Cook’s lighting design transports us from the world we know to the magical realm of the Prince and performers Shane Adamczak and Kylie Bywaters have endeared themselves to audiences with great charm and humour.”